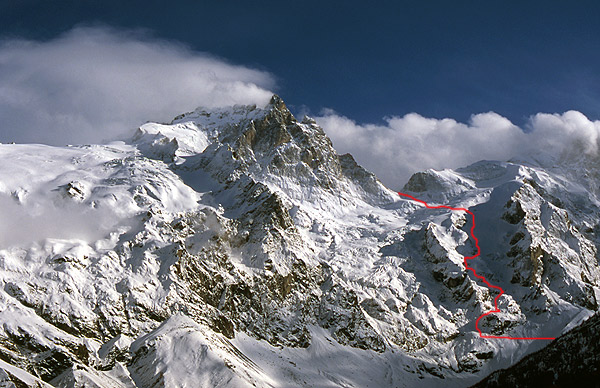 The descent
A piece I wrote back when I lived in France.
When you look skywards from La Grave, the first thing you see is La Meije. Below this singularly beautiful and dominating peak lies a huge expanse of glacier and rocky ridges. Whilst the scene is dramatic and eye-catching, it also looks inaccessible and terribly steep. If you ski at La Grave, however, one of the first things you will notice is that ski tracks seem to appear everywhere, whatever the obstacles.

The Enfetchores (‘s’enfetcher’, apparently, means ‘to lose one’s way’ in the local dialect) was the route taken by the locals in the old days during the summer to cross into the next valley. Respect. It basically goes straight up from La Grave to the pass that lies just beneath the Meije, some 2,000m above. In the winter, it can be skied in a single day but it is a long one. You have to scale the Brèche de la Meije from the other side, and this involves a hike of at least five hours. As a result, it is only skied on a handful of days during the season.

La Grave has worldwide renown for its off-piste skiing. The area serviced by the cable car is north-facing, austere and even the classic routes offer a multitude of ‘detours’ that include steep couloirs, glaciers, moraines, rock bars and dense forests. It is not for the beginner, in that just about all the skiing is off-piste, but nothing is artificial. What you get is the mountains as they really are, with all their natural beauty and inherent danger.

There are two basic routes from the top of the cable car (3211m), the famous ‘Vallons de la Meije’, which runs directly beneath the north face of the Meije, and the Chancel route, which tumbles down through gullies and rocky outcrops past the frozen Puy Vachier lake before bringing you back through the trees. Both these two routes are off-piste and offer fantastic skiing but La Grave also has huge potential for adventure elsewhere. And the Enfetchores is a real adventure.

Taking on a route such as the Enfetchores is intimidating. All sorts of route-finding, avalanche and glacier-safety criteria come into play and I had no desire to do this without a guide. Furthermore, my guide book described the route as “avalanchy, very steep (45°) and exposed”. Valérie, who runs the Bureau de Guides with great enthusiasm and efficiency, however, brushed away my anxieties with a Gallic flourish. All you need, she said, is a perfect weather-forecast, a guide and a good level of physical fitness. Stéphane was to be my guide and the forecast was perfect for the next day. 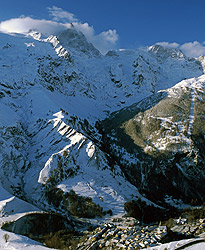 
There are two ways of reaching the Brèche du Râteau, which you need to cross before climbing up to the Brèche de la Meije from the south side. You either drop over the back of the Dome de la Lauze into the Selle Valley or you climb up to the Col de la Girose and descend the Girose couloir. The latter used to be the standard route, but the shrinking of the glacier with global warming has made it extremely steep (nearly 50°). I was keen on any option that avoided the Girose couloir, but the wide slope that falls away from the Dome de la Lauze towards the Selle refuge is of stunning beauty, so the choice was easy. We hitched a ride on the back of a lift attendant’s skidoo up to the Dome and started the descent.


As you go lower into the Selle valley, you feel as if you are plunging irreversibly into a parallel world. From the bustle of La Grave, cable-cars and drag-lifts, you suddenly drop into total silence, morning sunshine and a landscape of unharnessed, raw beauty that is on another scale altogether. This morning, however, the surface was still frozen and it was a little hair-raising. The slope is south-facing, and the sun had been sufficiently warm over the previous few days to form a crust, without being hot enough to transform it into spring snow. It is quite steep (between 30 and 40° over 500m) and Stéphane made it clear that jump-turns would probably break the crust and cause us to fall. So we gingerly stem-christied our way down the frozen face, as if on eggshells, and breathed a sigh of relief when we traversed out at the bottom.

Once I forgot the tension of the descent, I remembered why I was here. Not a trace of human life. The morning sunshine was bringing the surrounding summits to life, pristine snow stretched out as far as the eye could see and the silence was total, apart from the odd squawk from a hungry choucas above. Pure heaven. Suddenly, however, whilst I was fiddling around putting on my skins, a sharp cry from Stéphane made me look up. A boulder of ice about the size of a basketball was tumbling straight down towards us from the rocks above. We lay flat against the snow and it shot over our heads, narrowly missing our skis that were perched against the rocks. Just as suddenly, the whole scene was a picture of serenity again.

We traversed up onto the Selle glacier, which is flat, open and beautiful. You are surrounded by peaks on all sides, and are completely engulfed by the valley. We could see perfect ski-tracks snaking their way down from the pass high up to the right and tiny dots edged their way down the terrifying Girose couloir up to the left. The Brèche du Râteau, our next little challenge, loomed ahead in the distance.

As we took off our skis to climb the pass, Stéphane stopped me reaching for my crampons. You don’t have to bother he said, it’s a piece of cake. He slung his skis over his shoulder, without even bothering to fix them to his rucksack, and was at the top before I even had the time to say ‘mais’. In fact, the climb is not very difficult, and there were deep steps cut into the hard snow, but I still couldn’t help muttering that next time I would be putting on my crampons, ‘bout de gâteau’ or not.


The drop down the other side, however, is more intimidating. The first 10m are OK, but you are quickly funnelled into a steep, narrow couloir that shrinks into a slim gap between the rocks. Although east-facing and therefore taking the brunt of the morning sun, the snow was hard-packed from other skiers side-slipping. It’s also a bit like a snowboarders’ half-pipe turned on its end, which makes turning difficult because of the lack of space. Stéphane set off into a series of effortlessly linked turns only to look back to find me still side-slipping down the middle.

The next section is where you really need a guide. If you ski down to the floor of the Etançons valley, you add an extra two hours onto the climb up to the Brèche de la Meije (3357m). This makes the day even more demanding physically and means that you will almost certainly miss the last lift down at the end of the day. There is a short-cut, but it follows a steep and exposed route across the top of a ravine, which is avalanche-prone and difficult to find. 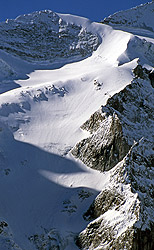 
Fortunately for us, the conditions were right and it wasn’t as bad as I had expected. The view of the Meije from this side, however, with the Promontoir hut just visible on its southern flank, is very different. The rock has a warm, orangy-yellow glow in the afternoon sunshine and you are struck by a strong feeling of remoteness, inaccessibility and general timelessness. The little Promontoir hut, clinging to the peak’s giant breast, merely seems to accentuate our insignificance against such magnitude.

After an easy climb in the hot sun, we reached the base of the Brèche at about 1.30pm and I hastily put on my crampons before anyone could suggest otherwise. The climb is then a straightforward 50m. Standing on the narrow pass, you have an extraordinary view over La Grave, the Romanche valley and the northern Alps beyond, even as far as the Mont Blanc. The snow below is pristine white and virgin, and the glaciers are sombre, ominous and threatening. Their deep blue crevasses gape at you in silence. The picture, however, is very different to the south. It’s as if you change seasons just by turning round. Spring is in the air.

The endless, mouth-watering stretches of powder below were now within snowballing distance. The descent from the pass is tricky, though, as the 50m face is unskiable. You can abseil it, if you have a long enough rope, or there is a sort of path round the side, which you can scramble down. We opted for the latter and I immediately realised that the snow beneath the pass was superb. It remains cold and shady here and I have rarely skied in anything so light. It was just a few turns though, as we had to traverse almost immediately across to the top of the descent. The ambience here is extremely ‘Haute Montagne’. As you make your way between the yawning crevasses, the feeling of altitude is tangible, exacerbated by the austerity of the north face of the Meije, which eclipses any remaining sunshine. We stood for a few minutes at the top of the enormous bowl, absorbing what we were about to embark on. I could see ‘Les Vallons’ 1300m directly below, still very red with Sahara sand following a storm the previous week. It seemed a very long way down.

The 6/8 inches of powder was remarkably intact considering the winds over the previous few days. Stéphane managed to find the best snow and we made turn after turn in light, forgiving snow that had me laughing out loud. It was amazing how the wind had completely ‘slabbed’ the snow in some places and yet twenty yards away it was perfect. And this bowl is huge. Although it wasn’t as steep as my guide book had suggested, I couldn’t help being awed by the scale of the drop and the tangible sense of emptiness beneath my skis. How often do you stand in powder with 1300m of vertical drop directly below you?

The route becomes more complicated below the glacier, where you have to negotiate a series of rock bars. This is where the fun begins. I felt as if I was continually perched on top of a huge cliff, wondering what type of obstacle was coming next. At one point, where sometimes you have to abseil when there’s very little snow, we had to wriggle our way over a short drop with a sort of a skip and a jump, which had me careering alarmingly off towards the rocks before I managed to control my speed. Before long, though, it all becomes a bit more straightforward and that familiar feeling of relief washes over you, reminding you with a jolt that you have had a thrilling day.

We just reached the cable-car in time and were whisked crankily down by La Grave’s wonderful old lift to beers in the evening sun. As I sat and mulled over the sun-drenched images that were now swirling around in my mind amidst the fatigue and satisfaction, I felt another familiar sensation. I had returned from that other world. One where a little tension and fear is a small price to pay for such extraordinary wonders.
Next
Previous